This hearty, warming dish of Italian-American descent translates as ‘shoemakers’ chicken and is accompanied by a sweet story as to how it got the name. When you eat it the chicken bones tend to stick out of your mouth in the same way a shoemaker holds tacks in his mouth.

The dish consists of roast chicken pieces in a herb and white wine sauce with delicate lemon flavours. It is a pretty versatile dish as it can be served with skin on or off and if you aren’t keen on lemon you can substitute it for other flavours. Lots of people like to add sausage instead of lemon which is yummy but I must say, personally, I feel the lemon gives it a nice little kick.

It goes great with mashed potatoes, green vegetables, even a nice, crisp salad. When done right the meat is juicy and tender and a firm family favourite. 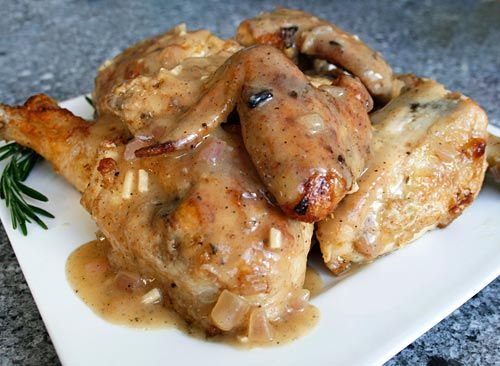 Salt and pepper to season